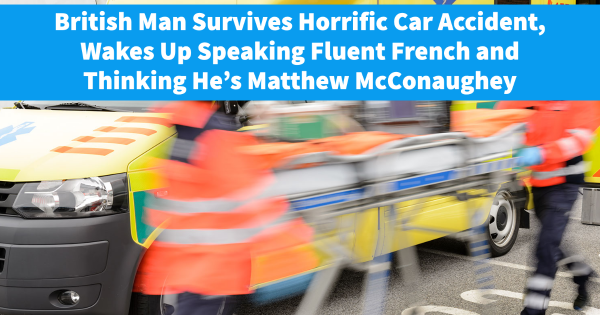 There are nearly 5.5 million car accidents each year in the U.S., including more than 30,000 fatal crashes and over 33,000 individual deaths. Globally, there are anywhere between 20 million and 50 million car accident injuries each year, and around 1.24 million fatalities. With these statistics in mind, it’s hard to imagine a car crash scenario that results in serious injuries, but also in some pretty funny out-of-body experiences.

According to recent reports, the injuries that soccer player-turned-barber Rory Curtis suffered in a 2012 car crash did not give him positive survival chances. The 25-year-old Brit suffered serious brain injuries and a broken pelvis after his car flipped over and was hit by by six different cars during a terrible rainstorm.

It took firefighters 40 minutes to free him from the wreckage, The Telegraph notes, and when Curtis arrived at Queen Elizabeth Hospital in Birmingham, he spent six days in an induced coma.

But when Curtis woke up, he not only began a successful, albeit long, road to recovery. He actually woke up speaking fluent French, and thinking that he was American actor Matthew McConaughey.

Despite only studying French for a few years in high school, nurses at the hospital told his family that he woke up and began speaking French fluently with one of the nurses.

“I was sitting there spouting a foreign language from my hospital bed acting all French in their sort of arrogant yet sophisticated way,” Curtis explained. “Also, in my head I thought I was Matthew McConaughey. When I went to the toilet, I went to look in the mirror and I was shocked because I didn’t look like him.”

Although Curtis eventually realized that he was not, in fact, Matthew McConaughey, he told The Telegraph that “…at times I was in hospital thinking ‘I can’t wait to get out of here and back to filming movies.'”

This mistake was reportedly just one of many blunders that Curtis faced after the accident; it took two months to learn to walk again, and he consistently had trouble with simple daily tasks that normally depend on one’s short term memory.

The fluent French has apparently not disappeared, however, which might just come in handy if Curtis ends up trimming the hair of a Frenchman. In the meantime, he is still undergoing an experimental treatment at a research center in Britain, which he believes has been largely responsible for his successful recovery.

“The accident changed my outlook on life,” Curtis states. “I can’t leave the house now without telling everyone I love them and giving them a hug.”

If you’ve been in an accident, there are a lot of things to consider. You might be lucky and have bruising after car accident, but no serious injuries. Or your situation might be dire. You might be one of the many auto accident victims who need medical attention and spend a lot of time and money to get it. In that case, you might need to look into car accident injury attorneys in order to get help paying your medical bills. They build up fast, especially if you are in a situation like the young man mentioned above who suffered severe injuries and woke up with some strange after-effects such as speaking fluent French and believing her was a famous actor.

You’ll need to care for both your mind and body after car accidents. If it is a serious accident, this might be a lifetime process. Even if it is not as serious, it is still important. So it is important to get the help you need in order to do this, both from medical professionals and car accident injury attorneys.