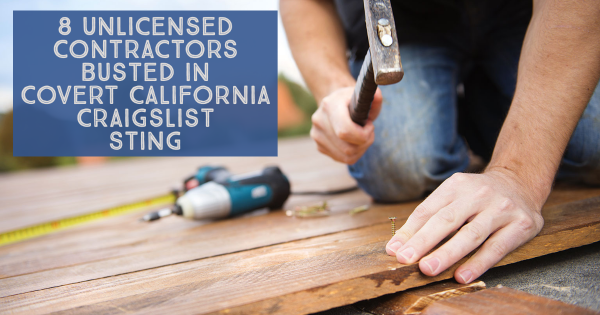 Spike TV’s hit home improvement series To Catch a Contractor may seem a little over the top at times — after all, it is reality television — but fake or unlicensed contractors posing as the real deal is quite common.

On Jan. 29, an investigative fraud team from the Contractors State Licensing Board (CSLB) partnered with the Tehama County District Attorney’s Office to carry out a sting operation at a home in Corning, CA.

The investigators targeted people online who advertised contractor services without having a valid contractors license, by posing as unsuspecting homeowners. They called the suspects to the home in order to bid on remodeling projects such as installing new kitchen floor tile, granite countertops, or a stone fire pit, as well as outdoor services such as landscaping, tree removal, exterior painting, and concrete work.

In the state of California, any home improvement project that totals $500 or more in combined labor and material must be performed by contractor with a state-issued license. However, bids proposed by the suspects far exceeded that figuring, with some as much as $16,000 for a new driveway.

The investigators immediately began making arrests as soon as the bids began exceeding the limit.

One suspect is likely to be charged with violating Labor Code section 3700.5, for bringing an employee who did not have workers’ compensation insurance coverage to the sting operation. That employee was immediately taken into custody after Tehama County District Attorney investigators determined he was currently on parole after serving a seven-year prison sentence for first-degree residential burglary and assault with a deadly weapon.

In addition, another suspect was on probation for arson and yet another was found to have drug paraphernalia in his pocket.

The eight suspects are scheduled to appear in Tehama County Superior Court on March 9.

“It’s unfortunate that the burden of vetting contractors falls mainly on the homeowner, but you have to do your homework to protect yourself and your home. Is your contractor licensed? Do they belong to any professional trade associations? Are they adequately insured? These are all important questions to ask and research before hiring any contractor,” says Michael Ullrich, of Pagenstecher Group.

When done with care, Craigslist can be a great place to find contractors. Craigslist is one of the places where you can easily find someone to do a job or get a job. All you have to do is search for craigslist and specify your location. Such makes it easy to find a job or expert near you. Among the common jobs advertised on craigslist is a flooring contractor. If you want to renovate your home, you can search find contractors for home improvement or find home improvement contractors. Craigslist indicates results within your search area, and this means you will find someone close to you to do the job.

You will also find contractors looking for workers. Therefore, if you are searching for a job, you might easily land one that will not require you to relocate. If you find a job, it is necessary to check the construction contractor job description. You need to be sure that you can meet the job description before you can apply for it. It is also important to be careful when applying for jobs on Craigslist. People are out to con others of their hard-earned money. If you are not careful when applying for such jobs, you might end up being a victim of fraudsters.